EVEN THOUGH THE WEATHER IS COOLING OFF; SHERRY STONE IS KEEPING IT WARM WITH TWO NEW RELEASES. 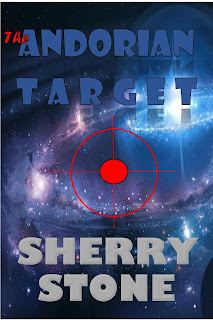 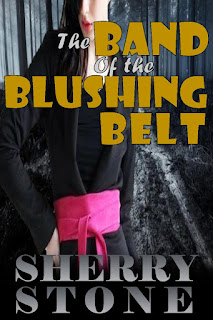 THE ANDORIAN TARGET: A Kelpien military operative is caught by surprise at a space port while hunting an elusive Andorian criminal and is at the mercy of
her desire.

Raven is on assignment on a distant space port in search of an Andorian fugitive. She has tried, unsuccessfully for some time, to apprehend her target and has resigned herself to return to her home planet empty handed.

She dejectedly returns to her room at the Inn at the space port and is confronted by her elusive target as she is getting out of the shower. The Andorian, L'Rell, has the intension of toying with her pursuer, one last time, before disappearing off into the galaxy.

L'Rell finds that the Raven can play the same game as well, and the two spend most of the evening to subdue her rival, and leave their opponent a spent, quivering sweaty mess. The battle has several momentum changes and it's in doubt until the very end if Raven will be proudly returning home with her target or will L'Rell leave her spent and defeated.

THE BAND OF THE BLUSHING BELT: An alien Earth exploration team has left behind a belt. A special pink belt. Writer Kenzi Dennis is hired to research it.

The Band of the Blushing Belt began when a woman taking a walk in the forest finds a glowing neon pink belt, in the grass. She takes it home and discovers the belt has unique qualities and provides strange powers. It also makes changes in the physiology of the wearer.

The Blushing Belt is the catalyst for the highly secretive lesbian organization of beautiful and powerful women. All lesbian and all part of the exclusive club. Kenzi Dennis, a free-lance writer, is contracted to do an expose on the group, and find out as much as possible.

Her search takes her to Northwest Arkansas, and the Thornwood Modeling Agency. Surprisingly, Kenzi is given a private audience with the owner, Constance Thornwood. Thornwood’s passionate interest in Kenzi gets her the exclusive interview and is then recruited by the fashion mogul. But first she must endure an initiation ritual that leaves her a changed woman.