SEX AND THE SACRED SCROLLS

Desir lives in a parallel dystopian universe to the Dark Ages of Earth. She is a Centurion of the Guard in this intolerant Matriarchal society that worships the Goddess Sophia.
CLICK HERE TO PURCHASE 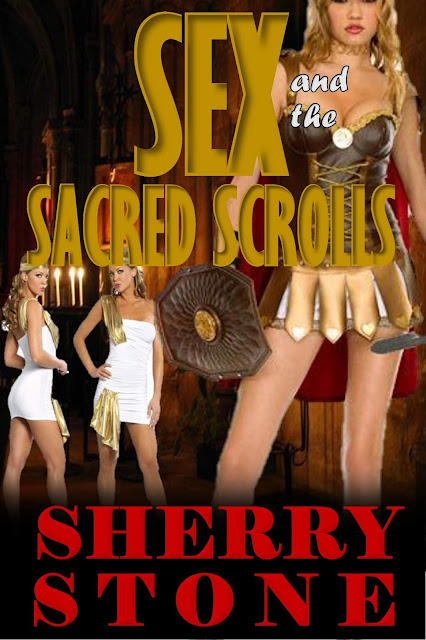 Defender of the Sacred Scrolls, Desir is a paragon of virtue; admired and respected by all. Her sister Enger, however, struggles with her love of other women, completely against the teachings of the Goddess Sophia.

Despite Desir's warning to her sister, she is found with another woman. Then endures a brutal trial before the people of the village, causing shame to her sister Desir and the rest of her family. Enger is burned at the stake as her punishment. Desir vows to rectify this horrible injustice as she watches her sister’s body burn.

Apparently undaunted by the execution of her sister, Desir remains highly visible performing her duties of defender of the Sacred Scrolls. She is watched closely by four women who struggle with their lust for other women, fearful of what will happen if Desir learns of their lusts.

Among the clandestine lesbians is Asmild and Thyra two rebellious teenage girls trying desperately to find sanctuary for their lesbian lusts, away from the watchful eyes of Desir. Also watching are Megan and Sanda two priestess' from the Temple of the Sacred Scrolls. They too, struggle with their lusts, and must hide from Desir and the Sacred Order of Sophia's senior leadership.

Each of the covert lesbians must live daily in the secret hell of fighting their desires and evading the watchful eyes of the Unrelenting Centurion and the vigilant Temple Leadership.