An Abundance of Time 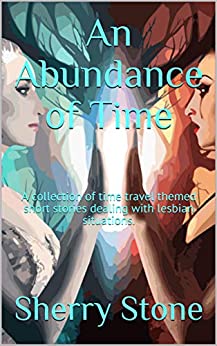 All stories have been previously released except for A Quiet Time.

A Quiet Time: Julle and Orchi are great friends, one of them is a Nurri and the other is a Quelf. Their two peoples have been sworn enemies for centuries. Both females decide the best way to keep the friendship is through time travel.

The Time: A gelatinous blob is an advanced force of for an alien invasion of Earth. Its plan is simple, divide, and conquer using mind control.

Pleasure in Time: It’s the 23rd Century and Mary Grey is a Captain in the Stellar Armada. She is also very much a lesbian. Mary excels at both.

The Reluctant Time Traveler: Sam was born with the alienability to jump through time. He can jump planets, times, and change persona. But he can't control when it happens.

Mistress of Time Manipulation: Nikki is a pledge to a sorority that is filled with bullies and sexual psychopaths. She is humiliated almost to her limit until an unlikely ally comes to her rescue.

Stranded in Time: Jacqueline wakes hungover with a blank memory of the night before. Then she is contacted by a person claiming to be a stranded Time Traveler who fills in the blank spots.

I really appreciate you reading my book! Please, if you have time, review my book. We writer's live for reviews. Comments are the lifeblood of any amateur writer, the currency in which they are paid.  It only takes a few minutes to send off a few lines, which is little to ask for in exchange for hours spent creating a story.  So be sure to take those few minutes, it can only result in more and better stories in the future.